Reaction to the studio gift:

Hey, received the little blue accordion today. It's A W E - some. I shall put it in my studio and enjoy it. I have another little accordion, it is red and it belonged to my father-in-law's brother (who has long since passed). Where did you get it? How old is it? What's the story? 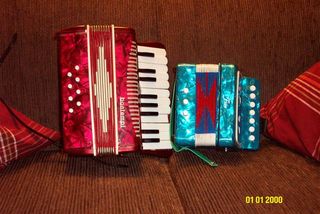 Just two accordions. BUT the blue one (smaller than child-size) has a heartwarming story where it puffs out it's magical song to a twin sister.

I was on to something here. I had piqued her interest and realized I needed to give her more, the little accordion had to have a history to it. So I sat at the computer and wrote:

Once upon a time there was a mother whose son decided he wanted to learn how to play guitar. Seeing as there was only one music store in town, both the mother and son went to check out the what's what.

Into the store they walked and lo and behold the little blue Fiore accordion poofed out it's bellows in the hopes the mother would see it. Naturally, because the mother had a good sense of humor, she immediately spied the little blue thing and went over to it. "Oh my gosh, is this ever cute...does it actually play?" Sure enough, when the mother put her hands to the arm and thumb straps, the little accordion burst into tune. Everyone giggled and hearty laughter filled the room.

The mother asked the proprietor the cost. The proprietor replied, "Well, one of the buttons doesn't work but if you want it, you can have it for $10.00.

SOLD! And twiddle-dee-dee, off to a new journey and home went the little blue instrument.

So good-hearted and jovial the whole world became when the little blue instrument played. The mother took it to many places, firstly, to her Baba Ann's at the Heritage Towers to definitely get her lungs cleared from laughing so gaily at her niece who burst into the room playfully pressing all the little white buttons in a strange cacophony of notes. What a great time that was! The two laughed and laughed!

Next, the mother took the little accordion to work and serenaded every one of her fellow employees and even a few clients who came for appointments. All who witnessed this wonderful site roared with delight. Those who most enjoyed this lively rendition of musical-note gibberish were from a Ukrainian background. (Go figure, us Ukes.) And not to be excluded, two women with French backgrounds spontaneously clasped hands and started a jig.

Great delight was had by all. And the little blue accordion did it's very best to please everyone.

But the little Fiore knew there was a better place to be to give the most pleasure of all. That place was 1554 Dieppe Crescent in a little music studio of a very talented woman who would love and keep care of it for the rest of it's days.

So, in being very considerate of the little accordion's feelings, the mother remembered that it wasn't only the price as being the reason for buying; she thought longingly about the good old days of taking accordion lessons with her twin sister (who was so much better at it than she), and she thought how proud she was of her twin sister for having her own music studio and what a great accomplishment it is. And she just wanted to let her sister know that she often thinks about each of their own passions in life and how to celebrate them.

So...while the little blue accordion still basked in it's fame and now had a history, the mother sent it away to her sister to celebrate, in a strange way, her sister's passion. And whether she knew it or not, the first time her sister opened the bellows, a whole bunch of love from her sister filled the room.

{Everything that happened in this story is true.}

Without fully realizing what I was doing until I got to the end of the story I was writing to her, I welled up with big tears thinking about how much I truly loved my sister, that my motive was love, that I had to somehow flood her with my love across the miles.

Mar, your story was most enjoyable, I loved it. I miss you so much and I am very misty-eyed now, thinking of not being with yous all for xmas. Now both accordions are special. The little red one is just a bit bigger and it plays just as the blue one, but with one of the keys having a broken tip.

A few minutes later, another email:

Man, i just read your letter again and I bawled and bawled. I love you.

Return to Gift of Love

Or return from Studio Gift to HOME Page